As someone who used to be a motoring journalist, I am no stranger to the standard-issue appearance of an automotive event. Oh sure, if miles per gallon and the new GL editions are your thing, you’ll gladly walk the aisles collecting brochures about Ford Mondeos and enjoying the cars. But, and it’s true, many automotive events look the same. Cars on rotating platforms, neon 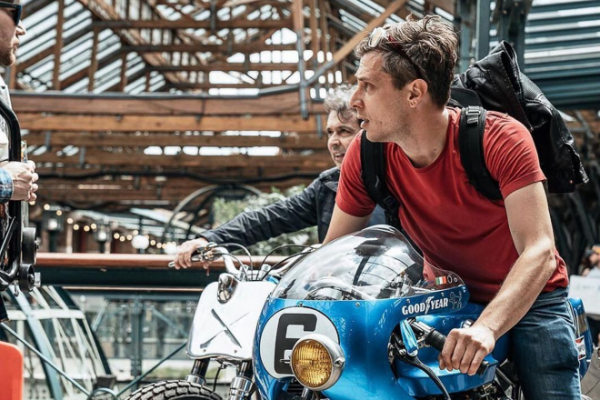 badges attached to trussing, and grey walls. From Tokyo to Geneva, you can rarely tell one from the other.

But does it need to be this way?

Dutch and Vikki Van Someren have been running The Bike Shed since 2012, and while this is not a show to unveil their latest models, there is no less a festival of polished alloys and metallic paint. It is aimed solely and squarely at motorcycle enthusiasts, but not strictly bike owners. It doesn’t matter whether you own a Vincent Black Shadow or simply own a Harley Davidson t-shirt: this show is a celebration of bike culture.

It stands to reason, then, that Dutch and Vikki would want a venue with character, and in London that leaves you with precious little option. Enter: Tobacco Dock. The working, industrial vibe is the perfect fit for such a show.

“There’s always be a motorcycle community out there that isn’t your traditional motorcycle event community,” says Dutch. “Motorcycle events generally are led by the industry; they’re trade fairs. We already had a community of story-telling bike enthusiasts back in 2011, and soon realised that they needed a destination event. We wanted to create this anti-thesis of a trade fair, something that centred around experience.”

In essence, Dutch and Vikki say they wanted to create a giant members’ pop-up club, and build a show that wasn’t exclusively for motorcycle riders. “You don’t need to own a Formula 1 car to watch and enjoy Formula 1,” says Dutch. “We want to give everyone the chance to experience the culture of it all.”

One and the same

Tobacco Dock is the perfect setting for pushing the boar – or bike – out, and Bike Shed absorbs the venue’s character in the simplest ways, as the walls are adorned with bike art and photography, marrying the event with the venue.

And it’s the experience that matters, as Dutch says: “It’s really important that we have really good food, great coffee, great bars, places to sit with comfy sofas so you can read a magazine in peace. 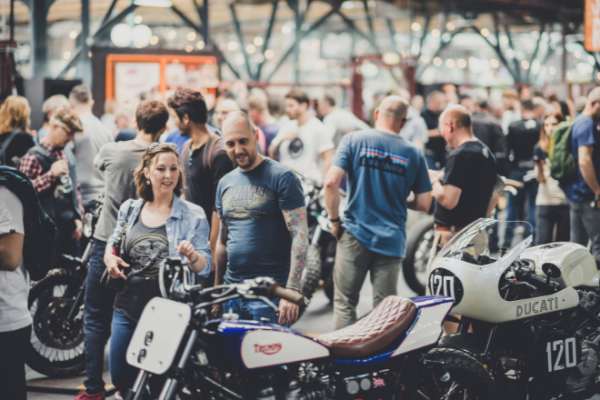 “We also have pop-up barbers, pop-up tattoo studios, live art, live music, and film screenings. We have tried to wrap up everything we thought was cool about motorcycle culture and it’s become an international success.”

Vikki says that the concept was conceived after it was clear there was nowhere for likeminded people to meet. “We used to take our bikes and meet at a pub. We didn’t drink of course, but we’d eat, have coffee and chat. Consensus was that we were bored with the annual trade show, where you spend most of your time giving your data to women in lycra. We asked: ‘what if we put on a show?’ And next week, Dutch turned up and said he’d booked the first venue!”

Their first show took place in 2012 in Shoreditch, not far from the current home at Tobacco Dock. That first event saw 3,000 turn up, so they ran another one later that year in which 5,000 people turned up. Vikki says they needed a bigger venue.

“If you’re going to have beautiful bikes, put them in a beautiful box,” says Dutch, referring to the bricks and mortar of Tobacco Dock.

“Our guests were blown away by the venue,” Dutch says, thinking back to the first time Bike Shed took place there. “They very much thought it fitted with where they started. We began in Shoreditch, which of course offered an industrial feel. Tobacco Dock had a similar rawness, and the fact that it was in Central London, not far from Tower Bridge just made sense.

“We wanted somewhere which people would get to on public transport so that they could drink and have a few beers.

“People love the space, but on top of that, as is the way with custom motorcycle culture, it’s about the engineering that you can see: engines, frames, wheels. So it suited the show to choose a venue where you could see the structure and the frame of the building. Steel columns and red brick arches was just the perfect fit. 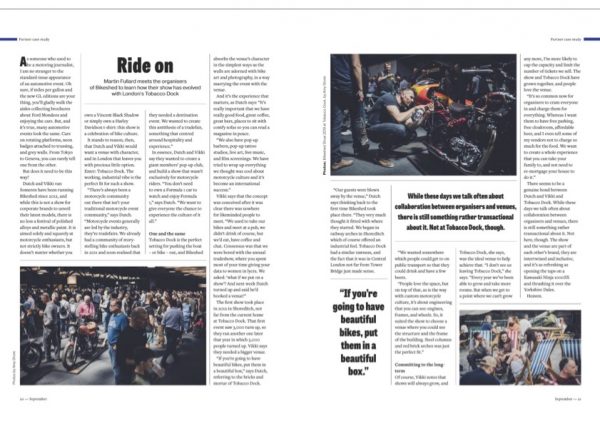 Committing to the long term

Of course, Vikki notes that shows will always grow and Tobacco Dock was the ideal venue to help achieve that. “I don’t see us leaving Tobacco Dock,” she says. “Every year we’ve been able to grow and take more rooms. But when we get to a point where we can’t grow any more, I’m more likely to cap the capacity and limit the number of tickets we sell. The show and Tobacco Dock have grown together, and people love the venue.

“It’s so common now for organisers to cram everyone in and charge them for everything. Whereas, I want them to have free parking, free cloakroom, affordable beer, and I even tell some of my vendors no to charge so much for food. We want to create a whole experience that you can take your family to, and not need to re-mortgage your house to do it.”

There seems to be a genuine bond between Dutch and Vikki, and Tobacco Dock. While these days we talk often about collaboration between organisers and venues, there is still something rather transactional about it. Not here though. The show and the venue are part of each other’s brand, they are intertwined and inclusive and it’s as refreshing as opening the taps on a Kawasaki Ninja 1000SX and thrashing it over the Yorkshire Dales. Heaven.

The brand-new Skylight Peckham, atop Mountview Theatre Academy, commands stunning views of the city, but the views inside are no less spectacular. Dominating the space is a specially commissioned work...