The brand-new Skylight Peckham, atop Mountview Theatre Academy, commands stunning views of the city, but the views inside are no less spectacular. Dominating the space is a specially commissioned work by artist Rachel Redfern. Measuring in at an enormous 6m x 1.5m, and representing a sunny skyline of its own, it adds a bold sense of dimension and colour to the space.

We spoke to Rachel about the painting and her process.

How did you come to paint such a large piece?

It was created especially for the space and is actually three separate canvases joined together. Jonny Read (Tobacco Dock’s Commercial Director) approached me after seeing some of my paintings at a recent exhibition in London.

Skylight is all about embracing the outdoors and so my brief was to bring the skyline and nature inside. While my exhibition was really focused on florals (a Kyoto blossom series), in the past I have worked predominantly on skyscapes. What Jonny wanted was a meeting of the two. The painting puts the viewer into the landscape, looking up through laburnums to the sky above. 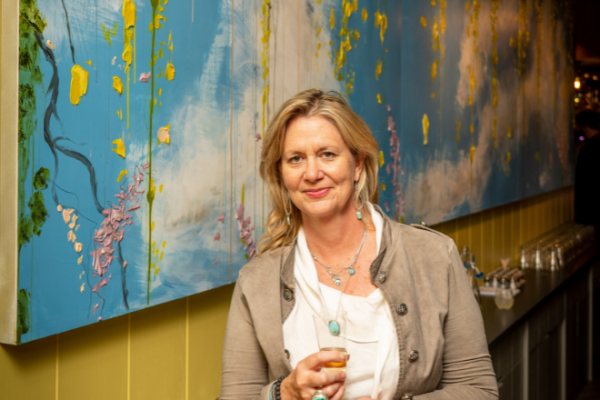 I knew the size of the space the painting needed to fill but when I got the canvases made up, it was still a surprise quite how big they were! It’s the largest piece I have ever worked on but also one of the quickest, which gave a real energy and momentum to the project.

What was it like having to create the piece in such a short period of time?

When I take on a commission, I usually take 6 months to complete it. In this case, I had 9 days!

From a practical point of view that meant that I had to do things in a slightly different way to usual, for example, using acrylic rather than oil paint so that it would dry in time. I immersed myself in the work. Usually I work from the studio, but this piece moved into my sitting room. I could wake up with it and tuck it in at night. As you can imagine, the addition of such a massive expanse of canvas called for a certain amount of patience from my husband!

‘The fear’ is a vital part of work for me. I need to feel a sense of danger when I’m approaching a piece, and the very tight deadline certainly added its own imperative. There was an urgency which meant there was no time for procrastination, and it added an exciting extra energy to the project, which I hope comes across in the finished work. Waking at dawn and spending time with the canvas in the mornings, coffee in hand, then watching the movement of daylight casting shadows behind the impasto as the evening drew in was a special experience.

I’ve kept the passage of the sun in mind, so that no matter what time of day guests are visiting Skylight Peckham they’ll have a slightly different experience of the painting. The impasto means that there’s an extra dimension to the surface and I’ve added touches of pearlescent lustre in spots to catch the light in the evening and add a little glimmer.

What’s the title of the work? 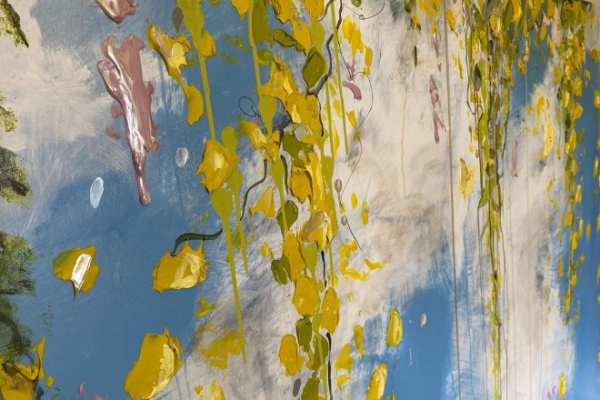 Jonny is an old friend of mine and having seen the way in which he’s navigated the challenges of running an events venue and hospitality business over the past eighteen months, I was inspired. His passion is creating experiences where people can connect. No matter what challenges have been thrown in his direction, he’d face each day without fear and deal with everything that was thrown his way.

There’s a sign in my office – ‘Look up for hope’. When times are difficult, just look up. For some people that may be towards a spiritual being, but for me it is very literal. The act of connecting with nature helps to ground us and to give us a lift at the same time. We’ve had a couple hard years. Nature has been the saving grace for many people through lockdowns, and the painting speaks to that.

I listened to ‘Rise Up’ by Andra Day on repeat while working. It’s about thinking big and being ambitious, using fear to catalyse something positive and I can connect that to the journey which brought about Skylight Peckham and the way Tobacco Dock works – always pioneering and looking for ways to improve.

Coming up to site as the bar was being fitted out, really brought home what an amazing thing they have achieved – taking an already great experience that they have created in the original Skylight and elevating it to the next level.

You mentioned that you already knew Jonny. Was it harder working for a friend than a regular client?

It meant so much more. I really wanted it to be right for him as well as the location in Skylight Peckham. Every painting means a lot but there was something in this particular one that was about marking this specific period of time from the last year and a half to something new and wonderful.

Commercial art could just be wall art but this is fine art and totally connected to the person and the brand. 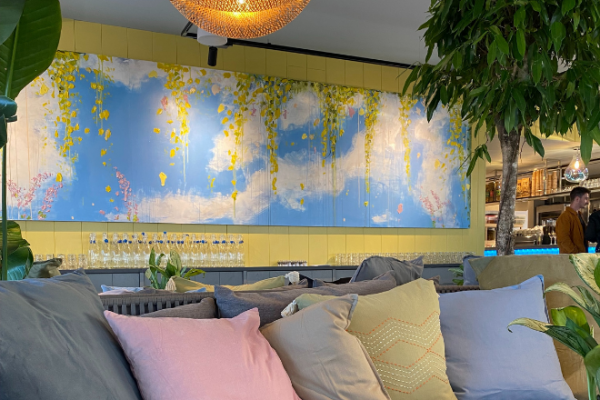 I often find that strange coincidences pop up when working and it makes me marvel at the depths of the subconscious. When I began painting, the painting triggered a sense of déjà vu. For years I had had a recurring dream about bright yellow flowers overhead, a blue sky beyond. I asked my mum about it, and she said that when I was a baby, she’d wheel my pram under a laburnum bush to give me some peace from my boisterous brothers. Perhaps I have been painting from memory!

What’s your favourite thing about the finished work?

Every painting has a ‘sweet spot’ and on this piece it’s a particular petal. I had grappled with it for ages. Every time I thought I had it right, the paint would drip down and change the shape. I tried painting over it, but when a fellow artist dropped over for a cup of tea, she immediately zoned in on it and suggested I let it be what it wanted to be. I took her advice and now it’s my favourite part of the work – see if you can spot it!

Tobacco Dock has appointed Anna Valley as its preferred audio-visual service partner in a move which will deliver their clients the market’s leading AV expertise and equipment. ‘Anna Valley’s experience...